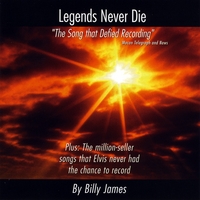 The Song that defied recording,"Legends Never Die"
How could a mere song defy recording? That would be a legitimate question if this was any other song. But it's not. This song has a history and suspense, as well as a track record of unusual events. That is what keeps it from being "just any other song". On the grievous hot night of August 16, 1977, Jackie Kitchens was inspired to pen the words to the song now entilted "Legends Never Die' in a mere ten minutes. From the time it was completed, Jackie knew that this was something special, "It was just about like he was there,"she later stated.

In 1990, 13 years after the death of Elvis Presley, an attempt was made to bring the song to life. Jackie Kitchens worked along with Chuck Carter, a song writer who had written the music to accompany her song, and together they tried to accomplish this task, but that became more of a task then they (or anyone else) were expecting. They had many technical difficulties during this recording. On the third take, when Chuck inquired of the problems, he was answered with "I don't know whats wrong. The wires are shorting out in the back of the studio." Carter's response? "It was like you could feel a presence. And then I went out to get in my car, and it wouldn't start."

The song was defying recording.

But in 1994, the song found its way to Billy James. And  now it has been recorded. The tracks for "Legends Never Die" were cut on the same equipment that Elvis himself recorded the album "Misty Blue". So yes, the song that at one time defied recording, defies no longer.

So go ahead, waste no more time, and open your mind as you listen to the song that has been said to "Bring the King back to Life"

In 1968, Elvis visited Hendersonville, TN at the "House of Cash" Publishing Company, There he met with Johnny Cash. Prior to Elvis' arrival, Richard McGibony, who was working on the set of Johnny Cash's TV show at this time, had personally dropped off most of the songs on this album for Elvis to review. The rest is history...

Be sure to order you copy of "Legends Never Die" on CD or Cassette Tape today. There are limited quantities available. Own a piece of Country Music History!